A few years ago I found a site/service called wttr.in that provides a terminal friendly weather report based on your location, or a location that you provide. For years, I had wanted to replicate this type of project for a simple view of the upcoming professional sports schedule, given a city. About a month ago I had a separate idea that I wanted to make an express app to play around with it after using it to make my team’s technical interview test at work. Then after brainstorming ideas for express apps I remembered the sport schedule idea I had wanted to do years ago.

I used express-generator to start an empty express API to start this project. I decided to use express and node when I noticed that there were many node libraries that would be helpful in creating my service for sport schedules. After setting up the empty project, I worked on setting up eslint and prettier. I run each of these using husky git hooks.

After setting up the basic node project, I worked on getting the hello world app deployed to Heroku. Heroku is nice for this use case because they host node applications for free! On top of that, there is a very simple integration with Github that allows you to continuously deploy without needing to do much other than give Heroku permission to link with your Github account.

How the App Works

When selecting sports to show a user, we take the closest team for every sport that currently has scheduled games (is in season). When your closest team/city has multiple teams for a sport (e.g. LA Lakers & LA Clippers), sprt.dev will show you both teams. 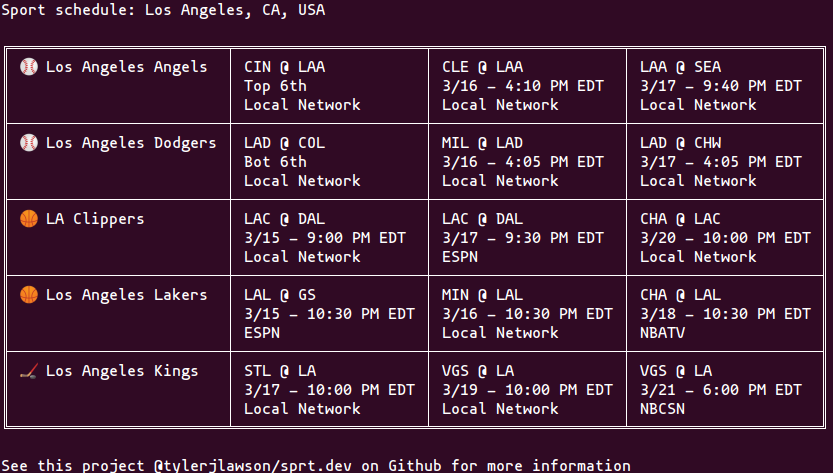 When you provide a city like this image, the app will perform a google maps search for the location specified like this:

Eventually, I would like to add to the functionality of the app. I’d be thrilled if others were to also start using the app and then make feature/functionality suggestions & requests on Github.

I had a lot of fun getting myself more familiar with Express JS while. I also loved making something that I will use everyday in the future to check when my favorite teams play. If you appreciate sprt.dev or are just feeling nice, I’d really appreciate a start on my Github repo. And if you ever watch sports, start curling sprt.dev!